Groups of smiling mothers, young and old, spilled out of their children’s primary school and into the street that faces the border wall in Nogales, Sonora. Just paces away on this same street is the spot where young Jose Antonio Elena Rodriguez was inexplicably shot dead through the slats in the wall by U. S. Border Patrol in 2012. 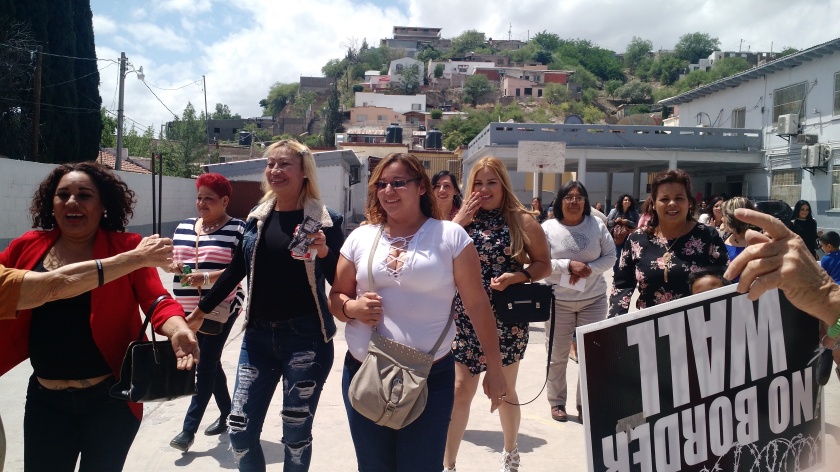 It is two days before Mother’s Day held in Mexico on Wednesday, May 10. We, mostly gray-haired Gringas, are waiting to meet the mothers of Mexico with bunches of flowers and cards in hand. I carry a homemade sign painted with an image of our Lady of Guadalupe with butterflies on one side of the sign and on the other: a painting of a migrant mother lettered with the message: “Bring Guadalupe Home.”

I imagine against hope that I might see Guadalupe Garcia de Reyos, one of the first undocumented immigrants deported in 2017.  But her children are not here at this school in Nogales, Sonora. They are in school in Phoenix, no doubt acutely missing their mother, especially this week.  This year and into the foreseeable future, they will endure two Mother’s days in two separate countries.

The Mothers here in Nogales, Sonora had been called to the school for a Mother’s Day Celebration. They had no idea until that very moment that women from the other side of the line had shown up with gifts.  Taken by complete surprise, they chattered excitedly, kissed and hugged us and each other.

The air was fresh and surprisingly cool for May in the Desert and I felt lifted up by a breezy righteousness rippling through the air.

We joined voices in a chant, tentative at first and then louder, – “Madres Unidas Sin Frontera!, Mothers United without Borders!” – https://youtu.be/HmxA78rtlxU – loud enough to reach the U. S. women organizers on the other side of the wall, who were now pressed up against the metal slats, like moths drawn to the light streaming through.

Women from the street scaled the concrete abutment up to the wall to personally give thanks to the women on the U.S. side. They claimed their right to unify as women and mothers, even as they faced the slippery concrete topped by the 18-foot wall: a slatted metal monstrosity that splits this border community right down the middle, an achingly unnatural bifurcation. 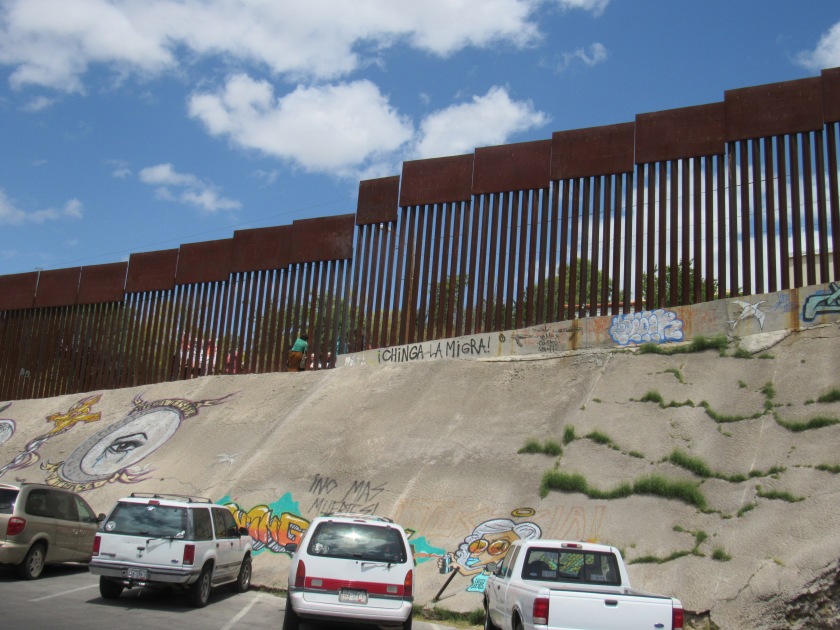 Lead by a large handmade banner that reads “Madres Unidas de la Frontera,” their Arizona neighbors reached out, hands and fingers through the slats, to touch the mothers from Mexico. On the U.S. side, they played acoustic instruments for the mothers below.  Homespun music carried on the wind like birdsong. 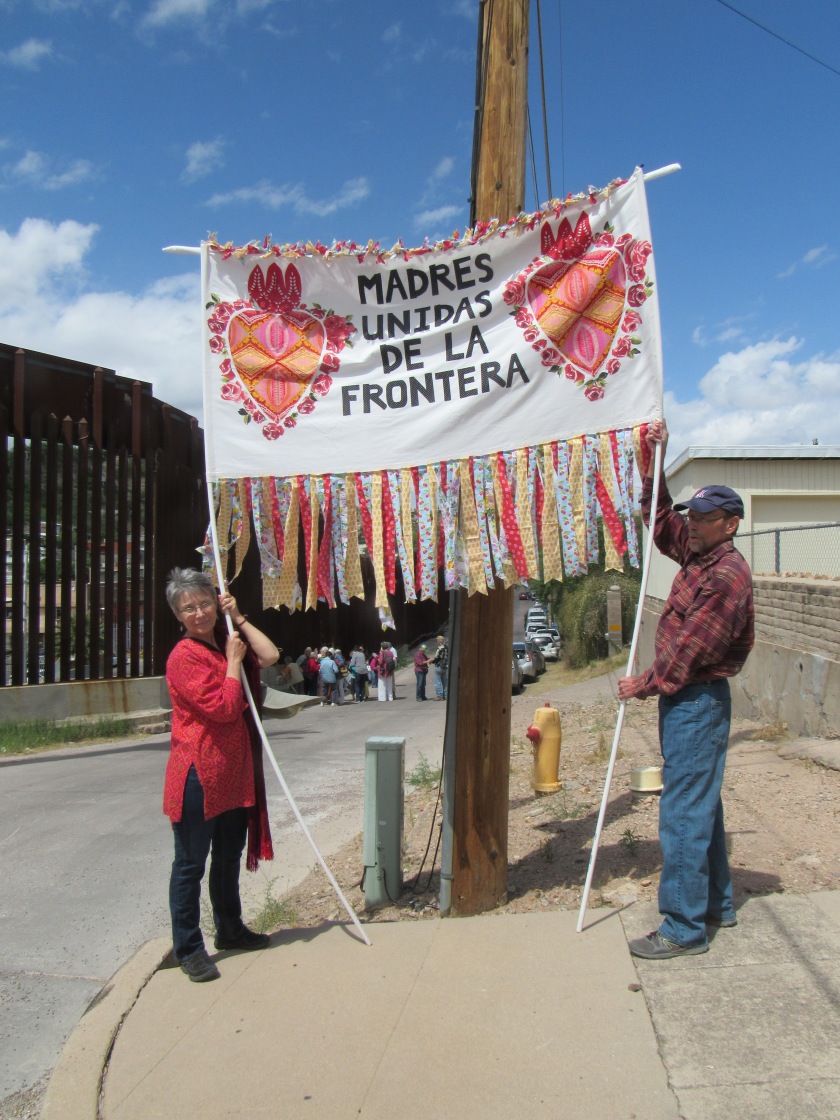 In response, Mothers in Mexico threw their heads back and sang “Las Mananitas,” –https://youtu.be/HmxA78rtlxU – a traditional melody one hears on special days: Birthdays, Saint’s Days and on Mother’s Day. Loosely translated:

Wake up my darling, wake up &

see that the morning’s here.

All the little birds are singing,

The moon has now disappeared.

VoicesfromtheBorder, www.facebook.com/Voicesfromtheborder/, a grassroots alliance of women from rural southeastern Arizona border communities – Sonoita, Elgin, and Patagonia – aims to transcend fear and build “bridges across borders with compassion.” Hosting a Mother’s Day Unity Celebration on the Border was born out of the women’s participation in the Women’s March in Tucson.

Rural Arizona women ask us to “Celebrate our shared plight as mothers and caretakers of our families, our communities, our Earth, and build a brave new world of peace and prosperity for all.

No more wasting time, energy, and resources to “Defend.” It’s time for mothers to rise. Time to tend, befriend, and join together for the good of all beings on the planet. 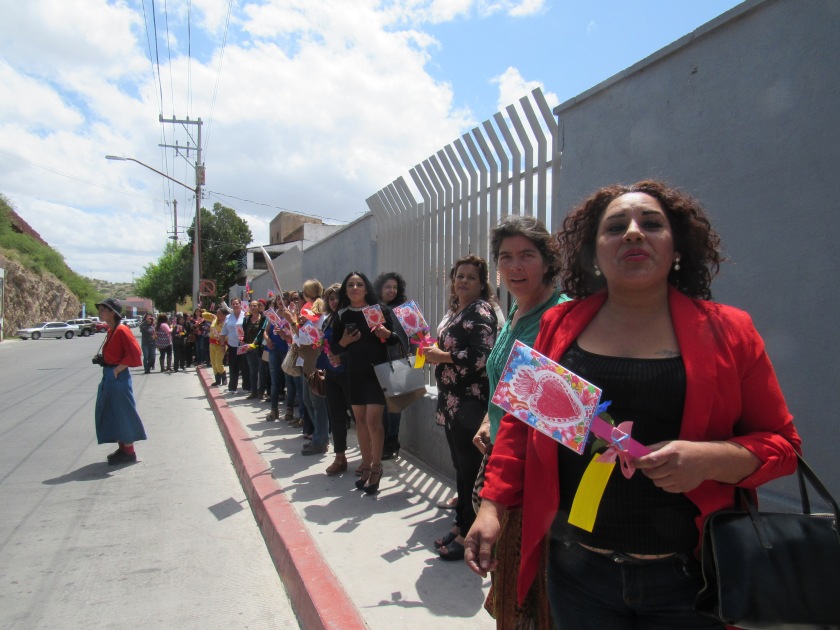 2 thoughts on “Mothers Across Borders” 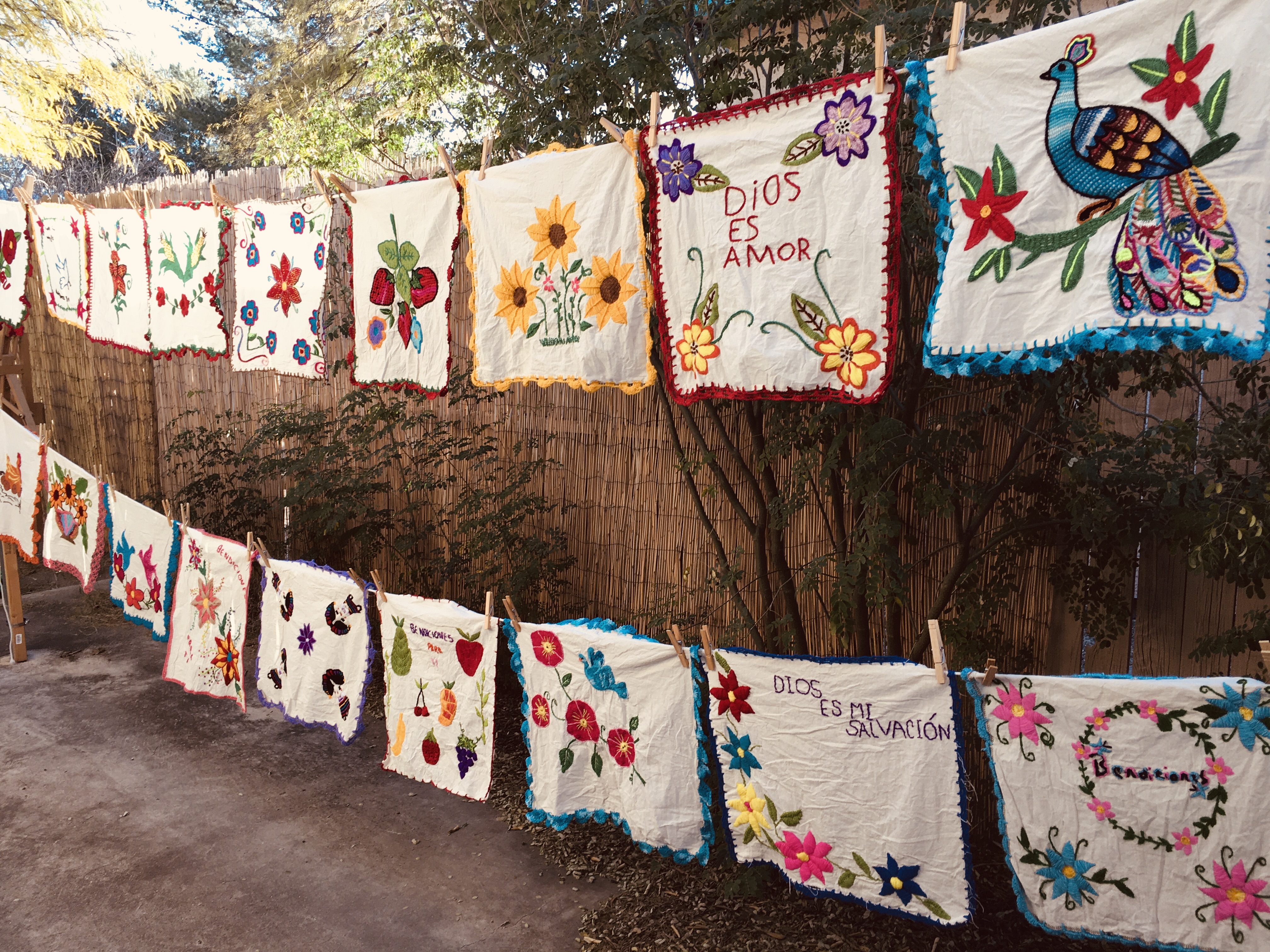